The exhibition, Bring it Home: (Re) Locating Cultural Legacy through the Body, curated by Meg Shiffler and Kevin B. Chen is a group show of ten artists that represents culturally diverse communities of the Bay Area and how they explore their sense of home and belonging. Though the show was laudable in its ambition, it reads as the same generic blueprint of “culturally diverse exhibitions” that are thematically built around popular assumptions about assimilation or migrant experiences. This becomes problematic because it dilutes the specificities of religious belief, history, and the politics of each artist and privileges the more digestible aspects of displacement. Tsherin Sherpa is one of the artists exhibiting in the show. He was a born and raised in Nepal. He studied in Taiwan and moved to the United States in 1998. As a thangka artist, he began his career painting traditional Tibetan deities. However, over the years he has embraced a more contemporary style. He still paints in the traditional Tibetan style, but more as an act of defiance to the dominant Western mode of art.

Both Hollywood and Western academics are over-interested in Tibetan culture. In fact, Tibetans are so discussed and analyzed that it often seems that Western concerns about Tibet are more important than Tibetan concerns about Tibet. It is only in recent years that Tibetan writers, poets, visual artists, and filmmakers have started producing work that represents the entanglements and the crisis of Tibet from the point of view of Tibetans—from those who have stayed in the country to those living in exile. This conversation with Tsherin Sherpa is an attempt to intervene and call out the problem with large omnibus shows like Bring it Home. It’s not that they’re bad, it’s that they miss out on the particular issues of a country like Tibet.

TT: I was looking forward to this show, because very rarely do Tibetan artists get a show in the Bay Area. Can you tell me more about your two pieces in the gallery? Did you make the pieces in response to the show?

TS: The two works in the show were not specifically made for the show; they were pieces that were in my own studio and one that was borrowed from a Bay Area private collector. The bigger piece, Fifty Four Views of Wisdom and Compassion (2014), was made for the Dhaka Art Summit in 2014. Since the exhibition was in Bangladesh, I did a research on the ancient ties between Bangladesh and Tibet. Atisha Dhibhankara, one of the key figures in the establishment of Tibetan Buddhism was born near Dhaka. He is especially recognized for bringing a teaching of the deity, Chakrasamara. Therefore, I took this deity’s image and fragmented it into 54 panels.

The other one is called, Baring it all (Machismo). This painting was a critique on our own Tibetan community. Our society is a very patriarchal one, and one can see it even in the representation of gods and deities in our traditional paintings. In the formal compositions of most Eastern paintings, the size of the figures speaks of the importance it has on the overall subject. Female deities are always smaller and in the background as compared to its male counterparts. And it’s still existent in our community and wanted to address that.

TT: I am curious if you have had many Tibetans come see the show.

TS: This is always been a struggle because it is not in our culture to got to museums and art galleries. So we’re always trying to invite as many Tibetans to come see the shows, but it becomes more of a social gathering without a deeper engagement with the art. However, I think Tibetans are being more receptive to newer and more contemporary forms of art. Some Tibetans are critical of my approach to using a technique that is reserved for religious art. But as an artist, it gives me a space to counter them. I am looking for situations to create work in and address them.

TT: Your father is a renowned thangka painter himself, and you have had a rigorous training in traditional thangka painting through him. Formally, one can still see it from the precision and skillfulness of the brushwork in all our paintings, but you also use the same technique to break away from traditional norms?

TS: My work is very much about commenting on that issue. I use sacred iconography in most of my works not only because of my training in traditional painting but also because in our community, there is such a strong distinction between the “sacred” and the “ordinary”. In my work, I juxtapose the sacred iconographies with the contemporary, mixing modern with the ancient. It’s my way of reacting to these hierarchies in our society that’s been created through the sacred.

TT: You’ve also had a chance to curate your own show in Berlin at Arndt Gallery. How was that experience of curating different from being included in a show where your work is curated?

TS: I met the gallerist during Art Basel Hong Kong. He was very interested to work with me so I suggested a group show of five Tibetan artists. It would be our first time showing in Berlin so I wanted to curate and put it together. I chose Gade, who is Tibetan and Chinese, Nortse, a Tibetan from Tibet, Kesang Lamdark who was raised by Swiss parents in Switzerland, Rigdol born in Kathmandu but grew up partly in Dharamsala and I, Tibetan and Sherpa. We’ve grown up in completely different environments and so I wanted the show to be about the artists’ Connections to Tibet/ being Tibetan based on our own experiences. So it would bring a complex range of work within our own Tibetan Contemporary Art.

TT: Most Tibetans because of our current stateless situation make art that is very political, but for artists in Tibet, there are real consequences for making political work, especially if they’re Tibetan minorities in China. Most of them do address paranoia, and images of surveillance in their works. So it’s very interesting to have the exhibition in Ardnt, which is an Art gallery in former East Berlin with their own history of government surveillance and censorship of art.

TT: It’s been a struggle for both Tibetans in and out of Tibet. We’re third generation Tibetans in exile but I still feel like a first-generation migrant because constantly migrating from one place to the other makes you feel like a foreigner. I also think that the condition of statelessness becomes magnified when you’re experiencing it in isolation. When I got my citizenship three years ago, I traveled back to Nepal and India as a American citizen and realized this privilege I now had. Being able to move from country to country so easily made me extremely aware, in a physical and emotional way of the condition of “statelessness”.

TS: Yes. Recently, in 2011 I was in Dharamsala for an art residency. Prior to that, my visits were very brief and I didn’t have a lot of time to spend with the local Tibetans. Whenever, we were out going someplace, they were mostly nervous about a police checkpoint because they didn’t have any paperwork. And I’m talking about these kids either born or came to Dharamsala when they were very young. They’re constantly reminded in these subtle ways that they don’t belong here. That experience was very unique to me because while my father is Tibetan, my mother is Sherpa and I’ve always had a Nepali passport.

TS: Yes, I was having a conversation with an Indian artist during a residency I was part of. She thought identity had become such a clichéd topic in the art world especially amongst minority artists. That’s when I realized our marginality within the diaspora. She was obviously in a more privileged space to say that because at the end of the day, she had a passport and could still move around the world more freely than any stateless person. It’s a reality for many Tibetans. 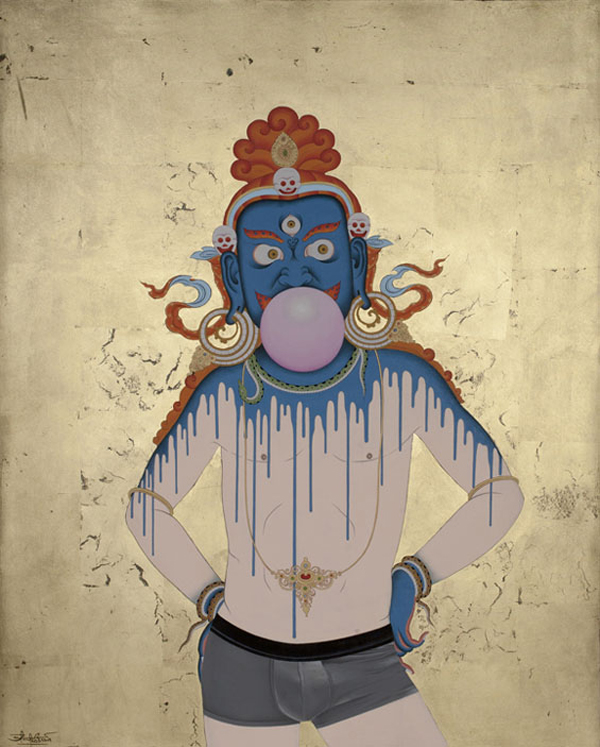 TT: So coming back to your own work, my favorite pieces are your paintings of the Tibetan Spirit. For me I don’t see so much of a deity as much as I see a masked person to conceal what’s beneath? It really embodies so much of the Tibetan who’s called out to constantly perform an identity that people expect to see. The more you look at the paintings, the more it unfolds. As a Tibetan, I really develop a relationship with this fictional character. It’s very memorable.

TS: After living in the United States for so long, I felt like there is always some projection of the “good” Tibetan. I found it humorous. So these paintings are very biographical, a self-portrait of sorts. And though the paintings are amusing on the surface, when I think more about it, it really saddens me. I want to share a story. In 2003, I was demonstrating traditional Tibetan work at the Asian Art Museum. During the lunch break I was having a typical cafeteria meal: sandwich, a bag of chips and coke when a lady walks up to me and starts apologizing for having corrupted me and felt sorry that I had to eat a packaged meal. I am sure it was sincere and well intentioned, but that response was so strange to me because she obviously didn’t realize that by 2003 sandwiches and chips and other fast food were pretty common even in Nepal. So my works are a direct reaction to how people view me and how I react to the peculiarities such as this.

TT: I wanted to ask about studio practice because your work is very labor intensive. Do you have studio assistants or you prefer to work on it yourself?

TS: Because of time constraints for some shows, you have to have some assistants. Firstly, it’s always difficult to relate your vision to someone else, but especially in my work which requires a specific skill set, its even more challenging. Luckily, both my Uncle and cousin are also traditionally trained under my father so I work with them very closely. However, I always do all the sketching and final touches myself. That initial part of the making and finishing it myself is important to me.

TT: Do you also use traditional materials for your work? What about gold leaf?

TS: I found a kind of acrylic that a lot of Japanese contemporary artists such as Takashi Murakami and Makoda Aida were using for their work. It’s a very opaque material and gives a certain kind of texture, which I like. Traditionally, we use gold dust; but there is no tradition of using gold leaf in traditional Tibetan paintings. But after getting a chance to work at the Asian Art Musuem during my residency, I got a chance to see a lot of old Japanese paintings and screens using gold leaf and I wanted to combine that in my work. So I taught myself, experimented with different kinds and eventually led to liking the material a lot because conceptually the material was very appealing to me. Like a lot of my work, I liked gold for the duality it serves: a currency and also as a sacred material in religious practices. Normally when used in Japanese and Chinese paintings, they’re very careful as to not to crack it, but I intentionally crack the leaf when using it in my paintings.

TT: Do you feel you have a responsibility as an artist?

TS: Every one of us has a responsibility especially in light of our current situation both in and outside Tibet. But I have this privilege of this platform that not everyone gets so I use it to address and advocate for issues I want to talk about. But that also means being open to criticism, addressing them and also engaging with the world and community beyond my own.